CCBoot server can be run on any system above Windows 7.

3. The third choice is Windows 10 Pro

Here is the recommended server hardware for diskless boot with CCBoot.

Server motherboard that supports 16GB or more RAM, 6 to 8 or more SATA Ports.

For 100+ client PCs, we recommend using 2 or more Servers with load balance.

Image disk: the hard disk that stores the client OS boot data. We call it an "image".

Game disk: the hard disks that store the game data.

Note: Please keep in mind that if your gamedisk is bigger than 2TB you should initialize this disk as GPT volume. 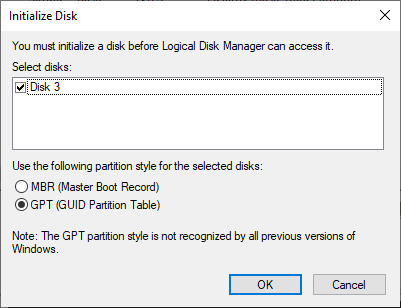 Writeback disk: the hard disks that store the client write data. In diskless booting, all data are read and written to/from the server. So, we need a writeback disk to save the client's write data. Other products are also named as "write cache".

SSD Disk: the disk that is used to cache game disk data. Caching game disk data in SSD Disk gives clients quicker access to game files as SSD is much faster than traditional HDD. In case if you use an SSD disk for a game disk the SSD cache disk is optional or just use an NVMe disk as a cache to improve the SSD game disk.

In case you want to use RAID 0 we recommend using Windows disk manager to setup RAID0 instead of hardware RAID in BIOS. We recommend setting SATA mode as AHCI in BIOS. Because AHCI is better for writeback disks' write performance. For more information, please refer to AHCI on wiki. In the BIOS, SATA mode can only be one of AHCI and RAID. If we set it as AHCI, the RAID function of the motherboard will be invalid. So we use Windows disk manager to setup RAID0. The performance is the same as hardware RAID0.

Raid 0 from SSD for writeback does not improve performance because for random read/write IOPS will not increase, raid 0 on SSD increases only sequential read/write speed.

Note: Do not use cheap SSD for writeback and SSD disk as they are unreliable and may cause clients to hang when the SSD gets corrupt. Also, do not use SSD for a few roles because it will reduce the performance. Choose an SSD with high read/write speed. Faster SSD for writeback results in better performance for clients. We recommend using an SSD with IOPS for random read/write more than 90K (for example : Samsung EVO series).

Note: Format all disks (Hard disks or SSDs) with 32K allocation unit except windows partition/disk , as it provides you the best performance. - Do Not skip this

Note: Allocation units also play a significant role in game performance, as we have found some games will experience lag if allocation unit is 4K, after changing to 32K the lag experienced was resolved.

Use CAT 6 Cable for best performance, can use CAT 5e for smaller deployment of 10-20 PCs.

Important: Do not use PCI gigabit ethernet card on the server if you are planning to add NICs to give more bandwidth to client

If you want to add more NIC then find PCIe gigabit ethernet cards as they provide better bandwidth than PCI cards.